Welcome to the antidote.

Sometimes I think the people at PETA just get really pissed and fed up at how little effect they’re having on the world, despite numerous celebrities posing naked to protest the sale of fur, so they all get drunk and come up with ridiculous shit.  At least that way they’ll get attention, right?

PETA just sent a letter to Ben & Jerry’s formally requesting them to start using breast milk instead of cow’s milk, arguing it will reduce demand and prevent some of the suffering caused by slaughterhouses and dairy factories.  They also seem to think it’s good for us.  Personally, I think it’s a little crazy.  There are no other mammals (well, that I can think of off the top of my head, anyway) that continue to drink milk after toddlerhood.   Although I suppose it’s also crazy to drink the breast milk of another animal.  With cheerios.

Anyway, according to PETA Executive Vice President Tracy Reiman, “The fact that human adults consume huge quantities of dairy products made from milk that was meant for a baby cow just doesn’t make sense. Everyone knows that ‘the breast is best,’ so Ben & Jerry’s could do consumers and cows a big favor by making the switch to breast milk.” 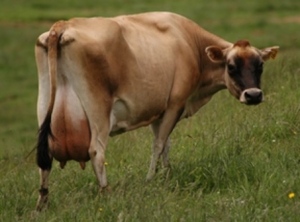