Welcome to the antidote.

At the end of their chat, after Samantha had passed the phone to Lindsay, Stryker inconspicuously threw in the question, “Now, you guys, you and Samantha have been going out for how long now? Like two years? One year? Five months? Two months?”

“I hope you guys stay together, you’re a very lovely looking couple,” Stryker responded, to which Lindsay replied, “Thank you very much.” 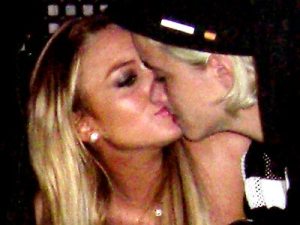 He must be pretty impressed with himself to have gotten the the first confirmation that Lindsay’s a bonifide lezzie!  Not that it wasn’t painfully obvious with their constant canoodling and not-so-undercover myspace posts, but all the same – cheers!